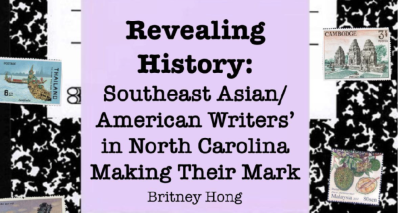 When junior Britney Hong began planning her Summer Undergraduate Research Fellowship, she knew she wanted to pursue research that was rooted in her own life experiences.

“I wanted something that was very personal to me,” Hong said. “Being an Asian American writer is a big part of my identity.”

Hong proposed her SURF project, “Revealing History: Southern Asian American Writers Making their Mark,” to the Office of Undergraduate Research and was granted funding for the nine-week, self-guided fellowship. A double major in American studies and human development and family studies with a minor in creative writing, she looked forward to leveraging skills she’d learned from across her studies.

Through a series of oral history interviews, Hong sought to explore the question: How do Asian American authors from the South use writing to reconcile their intersecting identities?

Conducting oral history interviews –– recording life stories for archival purposes –– was not a new experience for Hong. An intern for UNC’s Southern Oral History Program in the Center for the Study of the American South, Hong had facilitated interviews under the program’s guidance. But for her SURF project, she was in the driver’s seat.

At first, she cast a wide net: Asian American authors living in the U.S. South.

“And then I realized that was not realistic at all,” she said with a laugh, recalling the vast list of authors her query returned. “So I narrowed the field.” With the help of her mentor, Kita Douglas, UNC teaching assistant professor of American studies and a scholar of Asian American studies, Hong set her focus on Southeast Asian American authors living in North Carolina. She began to reach out to and interview writers, five in total, who were willing to share their personal and professional experiences.

“I focused on life history,” said Hong of her interview methods, “but with an emphasis on how writing has played a role in their lives so far, as well as their relationship to their race, ethnicity, culture and heritage, and how that has evolved alongside with writing throughout their lives.”

She asked questions like: When you imagine a world for future generations of Asian Americans, how do you see media and literature playing a role? When you were growing up, what was your community like at home and at school? What advice do you have for people who are interested in similar fields?

The authors’ answers were as varied as their writing styles.

Writer Shania Khoo, a recent graduate of Duke University who uses she/they pronouns, wrote her senior thesis on activist memory: the act of uncovering, interacting with and building on documentation of historical activism to ground current-day campus organizing. Khoo also created zines –– small, self-published works of writing and art –– to share their research.

“I’ve never seen any topic of that sort before, and it was very interesting how our own experiences were both similar and different,” Hong said. Both Hong and Khoo are Southeast Asian, grew up in Cary and went to neighboring high schools.

Hong interviewed four more authors: Eric Tran, a UNC School of Medicine graduate who shared his experiences living in both California’s Bay Area and North Carolina; Abi Mlo, a children’s book author whose work focuses on her grandmother; Ina Cariño, a poet who moved to the United States at age 11 and has vibrant memories of her childhood in the Philippines; and Ali Domrongchai, a UNC alumna and food writer who explored American political, economic and cultural influence in Thailand in her work “Performing Pad Thai: An Exploration of the Performance of Thai Cuisine as a Result of American Influence.”

Each author’s experience shed light on Hong’s initial question of what it means to be an Asian American writer in North Carolina, research that she is working to compile into her own zine, which will be the project’s final format. She hopes those who read her zine will better understand the value of writing, media and literature for historically marginalized groups in the United States, she said.

“I hope that they take away that a Southeast Asian American identity is not a monolith.”

Learn more about Hong’s research in her finished zine. And, stay tuned for more profiles on SURF recipients as part of the College’s feature coverage for University Research Week, Oct. 10-14.