The Search for Elusive Zines 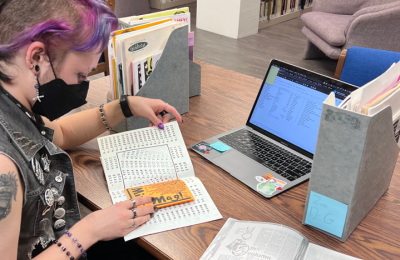 If you wanted to find senior Ashton Thorne this past summer, you might have looked in the Rubenstein Reading Room at Duke University or, briefly, in two Chicago libraries.

In those libraries and archives, he searched through and scanned thousands of pages of zines –– short, self-published works similar to magazines –– to research expressions of queercore and transgender representation in the 1980s through the early 2000s.

Queercore is a queer, punk subcultural and social movement that expresses itself through radical and do-it-yourself art and media, explained Thorne in his Summer Undergraduate Research Fellowship project proposal. (SURF projects are an initiative of the College of Arts and Sciences’ Office of Undergraduate Research.

Thorne, a psychology and philosophy double major with a minor in sexuality studies, entered his SURF project with substantial knowledge on the subject. “I’ve been interested in both queercore and zines for many years,” he said.

He had also taken “Introduction to Transgender Studies” (WGST 270), a course in which he studied queercore for an eight-page final paper. After turning in the assignment, he realized he had only scratched the surface of the topic.

For nine weeks last summer, Thorne dived into studying every queercore zine he could find in digital archives and libraries across the country as he searched to identify and understand transgender representation in the early publications. 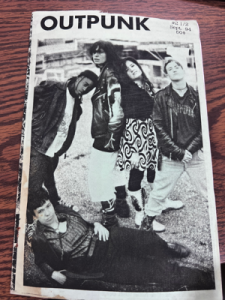 any of these zines, Thorne used part of his SURF funding to travel to Chicago to read physical copies at the Gerber/Hart Library and Archives and the School of the Art Institute of Chicago (SAIC).

Staff at Gerber/Hart, a volunteer-run library focused on the culture and history of the LGBTQ community in Chicago and the Midwest, set aside every box of zines in the collection for Thorne when they heard he wanted to read and scan their archived queercore issues.

“I spent six hours in there. I looked through every single one of their zines,” he said.

Outpunk, a zine published in San Francisco in the early-to-mid ’90s, was a special find for Thorne. After being unable to locate any issue online, he found multiple physical copies at Gerber/Hart and SAIC. And, after an email to researchers at New York University, he was able to access the rest of the zine’s run.

“I ended up getting [digital copies of] every single issue of the zine that I originally thought I would not be able to read at all,” he said. “So that was very exciting.”

Thorne’s final presentation of his research is an essay in which he analyzes the way that queercore zines interact with politics of transgender liberation and anti-assimilationism. The subject, he says, has an incredible opportunity for expanded research, and he would like to be a part of that.

“Every time I finish writing a paragraph, I’m like, ‘Oh, no. This could be another essay,’” he said with a laugh. “And there’s not a lot of scholarship on queercore in general. So I feel like there’s a lot that I could do.”

He hopes that anyone reading his research is inspired to write their own story or express themselves through art and culture similar to how these zines’ contributors added to the definition of queercore.

“My thesis as a whole is that queercore is something that is more ephemeral than material zines or records. It’s more of an idea that asks you to contribute to it. I would hope that someone reading it is like, ‘I want to make a zine now.’ Or, ‘I want to find music from this era.’”

He added, “This culture is whatever radical, queer people make it. So what do you want it to be?”