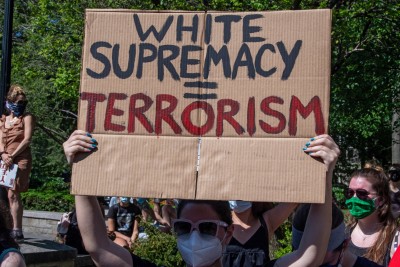 A Undergraduate Research Consultant Team (URCT) funded by the UNC Office for Undergraduate Research has released a ground-breaking dataset which it hopes will prove useful in the investigation of and the fight against domestic terrorism. The primary dataset team consists of A.A. Mattheis, M.B. Doty, A. Sin, M. Conley, C. Oh, S. Triana, and D. Antonetti. They received direct support from C. Dauber, M. Robinson, B. Ladd, and K. Papadopoulos.

According to the team, the URCT built this dataset using information from the Department of Justice with a goal of assisting “our team and other researchers in the systematic study of US federal charges and prosecutions associated with this growing threat.” Their announcement about the dataset mentions that the team hopes researchers from various disciplines and backgrounds might help expand upon their endeavor. The team welcomes others to join them in working to create future iterations of this dataset as well as sets for state criminal charges as part of a larger, community-based effort.

As per a recent OpenDemocracy.net article (“Documenting domestic terrorism in the US: this new dataset exposes the legal response“), the UNC set “provides information about individuals arrested and charged for federal crimes linked to ‘domestic’ terrorism stemming from white supremacist, nationalist, accelerationist, and male supremacist ideological cultures and groups.” The URCT team aggregated a massive amount of data for immediate analysis, which they have made it available at the Centre for Analysis of the Radical Right.

This information will be crucial in aiding the fight against domestic terrorism, and its availability reduces the difficulty of evaluating, researching, and analyzing these incidents. The research team have detailed their methods for collecting and presenting the data as well; you can find out more about their process by clicking using this link.